Smiling through disaster… Resilience of a Pokot girl 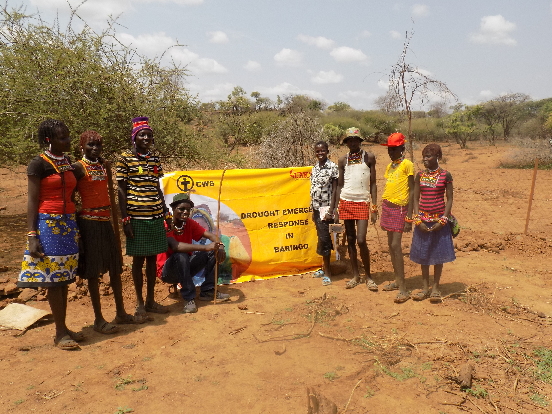 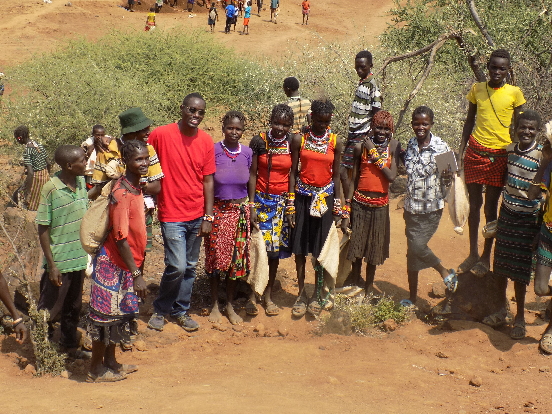 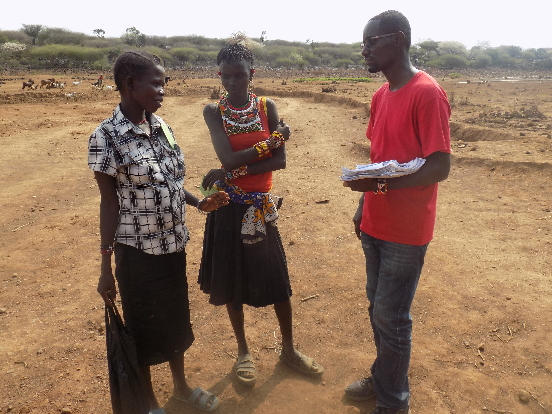 Faith Kapkomor is one of a kind; at 21 years she is the first born in a single-mother family of nine. She is also a single mother of one and is currently six months pregnant. Faith is one of the few educated girls in her village; she has completed her secondary school education  and has  good leadership skills evidenced by the way she led her CFW group to complete the activities, which in a conservative patriarchal society like East Pokot is very rare. Faith has suffered through the drought trying to raise her own child while helping her mother feed her younger siblings yet she always wears a smile despite the hardship that she and her family have been going through. She says of the situation before the emergency project intervention, “tulikuwa tunakula matunda ya msituni kwa sababu hatukuwa na chakula na mifugo walikufa…ng’ombe karibu mia moja na mbuzi zaidi ya hamsini. Hiyo matunda ndiyo pia tulikuwa tunachemsha alafu tunapatia watoto kula kwa sababu hali ilikuwa mbaya sana (We were eating wild fruits because we did not have food and our livestock died…about 100 cows and more than 50 goats. That is also what we were boiling then feeding to our children because our situation was desperate)”.

Faith further added that her younger siblings had been sent home from school due to a school fees balance of KES 350; they would rather have spent this money on buying food than school fees. She said that being six months pregnant had further complicated the already difficult situation since she, as the first born, was supposed to be the one taking the lead in helping out her mother to go fetch water and do odd jobs to get some money for food. However, she could not walk the long distance to the weir and neither could she do any odd job, such as burning and transporting charcoal to sell. The situation was further aggravated when three family members who are their neigbours died; she said, “Watoto wawili wa jirani yetu walikuwa wanatembea kutoka kutafuta chakula msituni alafu mmoja akaanguka njiani akafa na huyo mwingine alipokimbia kufika nyumbani kuripoti pia akaanguka akafa. Baba yao alipoona hivyo alichukuwa Kamba akajinyonga na pia akafa kwa hivyo kijiji chote tumekuwa na huzuni sana (Two children of our neigbour were walking home from looking for wild fruits and one collapsed and died. The other child rushed home but on reporting also collapsed and died. When their father saw this he took a rope and hanged himself, therefore, all of us in our village have been very sorrowful)”.

According to her, the emergency response project has been a life saver due to its timely intervention as she says that the dire situation could have led to more deaths since there had been a long delay in getting relief food from the government which they had been promised. She said, “Tumetumia pesa kununua chakula ya kuweka nyumbani na kurudisha watoto wetu shule (We have used part of the cash to stock food and pay school fees for my siblings)”. She added that she plans to use the rest of the money to buy three goats and three chicken which will then reproduce and she can sell the goats and eggs to raise income for her family in the long term. “Hata mtoto wangu anakula vizuri na natumaini atazaliwa bila shida yoyote” (Even the baby I’m carrying in my womb is eating well and I hope the baby will be born healthy)”, she added. Like her name, she said that faith in God had kept them going through the drought since most of the promises of relief food and other humanitarian aid they had received had not been honored.

On the project implementation, Faith said that she was happy with the way beneficiaries were identified and selected, particularly the fact that each household was allotted one beneficiary slot and therefore it was inclusive for the Mondi community. She also said that the identification of ten vulnerable unconditional beneficiaries comprising of the very elderly, people living with disabilities and homesteads with orphans, who benefited from the cash was a good gesture that the community was grateful for. Due to the famine occasioned by the drought, she added that it would have been very difficult for the beneficiaries to participate in the cash for work activities were it not for the food that was bought for them as lunch. She added that it was very practical that the tools were bought for the beneficiaries instead of them having to bring their own from home. However, Faith was of the view that the community needs more similar projects in future, the number of working days could be increased so that the community can work on a bigger project as this one was limited by time.

(Faith’s story was collected by Michael Gichumbi, the Emergency Response & Disaster Risk Reduction Officer of Farming Systems Kenya. These events occurred from mid-June to mid-July 2017 in a cash for work project by FSK and CWS Africa where the Mondi/Silale community in East Pokot sub county were desilting the Napeikore weir which is their main source of water for both domestic use and livestock watering. The project was significant as it was a timely response to the drought, which has ravaged the area from November 2016, since people had already started dying of hunger. FSK has been working in the East Pokot and Baringo areas for more than 10 years and therefore has relevant and up-to-date information of the situation on the ground gained from project site visits, meetings with the communities and with the county officials.)