Integration of Dairy Goats With Other Income Generating activities (IGAs) . 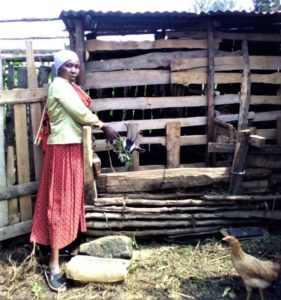 Mr. Benson is an active member of Visoi self-help group in Rongai. He is amongst the first beneficiaries who received dairy goat in 2010 after losing all his property and wealth to the post-election violence of 2007/2008. He is a married man and a father of four children. The goat he received he named her “Susy” which has been a blessing to his family. Susy has kidded 8 times to five female kids and three male kids. Through the project he has been a blessing to the needy within his area, he has given out one doe to a widow who was very grateful, and her life has really improved.

Besides practicing dairy goat husbandry, Benson is also a farmer in the forest where he farms 3 acres on maize, last year he was able to harvest 60 bags of maize, which by selling half of his harvest he was able to clear school fees arrears for his eldest son at Egerton University and his two daughters in high school.

He had some knowledge of credit provided by the government back in 2011 and through that, he has accessed loans. He has been able to buy six plots in Salgaa through loans and sale of farm produce and has one plot in Molo.
He has also ventured into poultry farming, in June 2017, he got connected to a farmer who was interested in local indigenous chicken, and he sold off poultry worth Kes. 16,000/=. He now has 80 hens remaining, which he intends to increase to double or even more even as he targets the December festive market. He also gave back to his society by giving out two hens and a cock to another widow. He has now started to receive some interested farmers on poultry and is offering some training and advice based on his experience that has made him very popular in his area; they now refer to him as “Benson wa guku” which means “Benson the poultryman”. 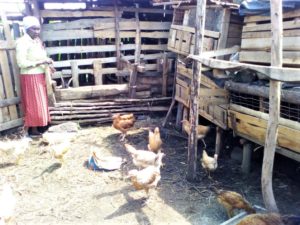 He currently has two goats, Susy and Diana, Susy’s kid and the two have kidded to male kids. During the previous dry period that was so intense to the extent that there was inadequate milk in the Kenyan markets, Benson was happily getting two liters from his goats, which has been enough to meet his family milk requirement. He is more than grateful to FSK and Children’s Hunger Relief Fund (CHRF) support, which stepped in at his most needy point and transformed his life.